Well! Hawk will be two weeks old this Thursday. I knew he was going to be born during a snow storm… our egg retrieval last February was in a blizzard, and when I found out I was expecting in January, I knew immediately that he would be born in another snow storm. I was right!

So at midnight on Wednesday, January 3rd, I was moved from the antepartum section of the maternity ward over to the labor and delivery side of the maternity ward. They started my induction at 2 am with a little tampon like string called cervadil. I was 1 cm dilated already at that point. My cervix was high up and not soft. The anesthesiologist came in at one point and explained epidurals and what could go wrong if something did go wrong. Shortly after he left (he was very informative and kind!) I had my first of four panic attacks. My mom and I walked around the ward because I felt trapped just laying there, and we looked at the newborn babies in the nursery through the windows. That helped me feel better. I slept fitfully on and off after that. Around 7 am?? I had a bad headache and took some furiset.. but as I was trying to swallow that I threw it up. The nurse put one of those vomit things in front of me and I vomited pretty hard. Ugh, it was awful. They got me some anti nausea meds after that. When I’m anxious I have a hard time eating, so I think this is why I threw up. At 2 pm they checked my cervix… I think I wasn’t really dilating very much at that point, but my cervix was getting lower and softer. They put a foley balloon in at that point, which I was nervous about. They also put another dilating drug on my cervix. It was totally fine, I didn’t feel a thing! Until 5-10 minutes later, when my contractions went through the fucking roof. After getting on all fours and moaning and crying out for some time, they got me some morphine. The morphine was super helpful and it calmed me down, too. I fell into a nice sleep. My birth photographer showed up at some point. This time period is a little hazy because the morphine had me loopy. At 3 cms dilated the foley balloon falls out on its own, and maybe around 4 pm? it did fall out, when I was in the bathroom. My nurse and the doctor were super pumped about this and started talking about pitocin. I had another panic attack before they started the pitocin. My husband helped me through so much. I wish I could remember more details but the further into my labor story I go, the less I remember. They started the pitocin low and slow and ramped it up over time. I had some nubain for pain, more nausea meds, and I wasn’t really eating or drinking. At 5 or 6 in the morning on Thursday, I got my epidural. I had been in some pain and couldn’t hold out anymore. The epidural was fucking heaven. HEAVEN. I slept for a LONG time when I got it. When I woke up it was basically go time. I was in active labor for 3 hours, and I pushed for half an hour. The epidural did not touch my vagina for pushing. I can still hear my own scream noises in my head when I think back to that time. Earlier in my labor I had heard women screaming and asked my nurses if they had had epidurals. We thought they didn’t… after being one of those screaming women, I can confidently say they just might have had an epidural, lol. I wasn’t aware that there was a chance you’d feel the pushing with one! I felt an immense amount of pressure, and it really does feel like you are taking the biggest dump of your life. I felt the “ring of fire” as I’ve read about in birth books, and my nurse and doctor (a 3rd year resident) were SO amazing in coaching me, as well as my husband. My mother, father, and mother in law were in the room for the delivery. I remember telling my Dad not to look at my vagina, hahaha. They had a side view, and were behind a curtain at times. I kept telling Adam I couldn’t do it, and he kept telling me that I WAS doing it. Finally, I pushed as hard and as long as I could on that last push and I felt a huge gush. My eyes were closed and my head was thrown back, but I’ve been told that Hawk shot out of me like a harpoon, his umbilical chord flying behind him. The doctor caught him with one hand/arm. He literally flew, my baby bird! Immediately I started crying and asking if he was okay- and he was! I probably said oh my god 20 plus times, which apparently made my nurse cry. They put him on my chest and the love I felt for him overwhelmed me. I’m getting tears in my eyes just remembering that moment. He was so small and warm and I wanted to protect him from the cold world. I remember looking up at Adam who had tears in his eyes. When he was born I heard my mom let out a sob. My parents and Adam’s mom were crying with happiness. After they took him from me to clean him up and do all the measuring and weighing, I remember just staring at him from my hospital bed. I had a second degree tear which they stitched up, and they got the placenta out of me- which I asked to see in great detail. Oh! Also! The doctor asked who wanted to cut the chord and Hawk’s hand shot up and grabbed the handle of the scissors. We all stared with open mouths and had to pry his hand off. He had quite the grip! He was born at 5 pounds, 15 oz and 19 and 1/2 inches long.

Our hospital stay was fine, we need to use a nipple shield to breast feed him but he’s doing well. He had to stay an extra day because he had jaundice, but he’s okay now. I stayed in a boarder room so I could feed him every two hours.

He’s starting to fuss so I guess that’s that for now. I should have written this when it was fresher in my mind, but all my energy and time has been going to Hawk. I love him so much. I think he is the cutest most amazing baby I’ve ever seen. Sure, I’m biased.. but you know. Here are a few photos. I am so so happy 🙂 tired mom, signing off… 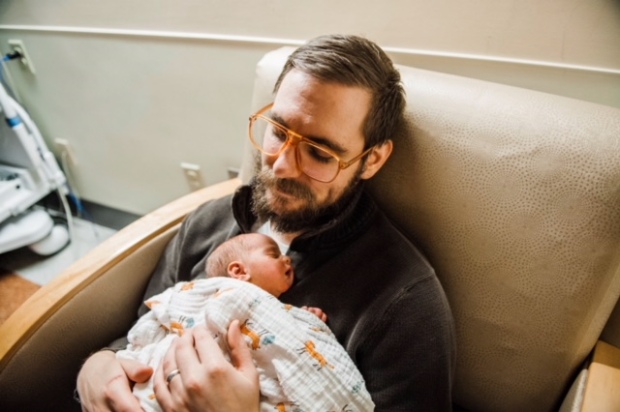 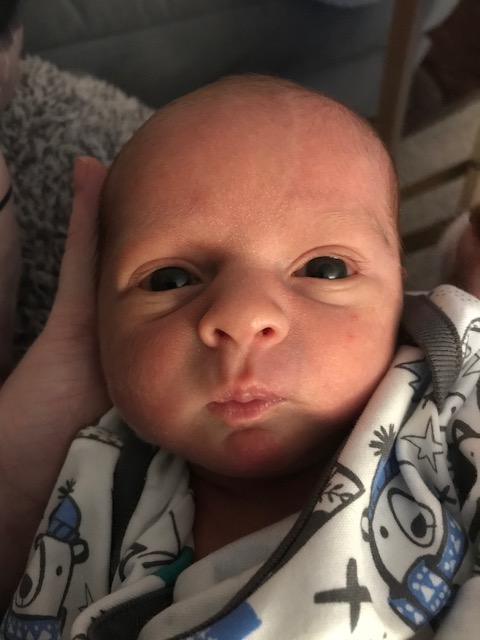