Had my 20 week check up and anatomy scan today. Turns out my placenta is in between little man and myself which is why I haven’t felt TOO much in the way of movement or kicks- and if I do feel things it will be on the sides of my belly- which is true! I’ve felt a few flutters and flicks over there before. So a while longer but that’s okay.

He is measuring RIGHT on target, which is great! We got to see everything- his arms, his legs, his hands, his feet, his bladder, his stomach, his kidneys, his heart and it’s 4 chambers pumping away, his brain, his abdomen.. etc etc. He looks great, is measuring great, and my doctor said we are now at the cruising stage of pregnancy. Adam was super grossed out by the whole thing except the profile shots- he gets very squeamish. I probably said “cool” like 200 times- hahaha.

I asked my doc about my heartburn and she said it would be okay to take Zantec to help, twice a day. I also mentioned my sciatic pain I’ve been getting and she gave me a few exercises I can do and told me to do yoga. I’ve been so tired I have totally dropped the ball on yoga AND exercising. I’ll do my best!

I haven’t gained any weight and she said that’s okay as long as the baby is okay- which he is! She said since I started out a little overweight she is not worried about it.

I signed Adam and I up for all of our classes- starting in late November and going into December. Prepared childbirth, Newborn care, Breastfeeding, and Infant CPR and Safety.

I guess that’s it for now. I can’t believe we are halfway there!! 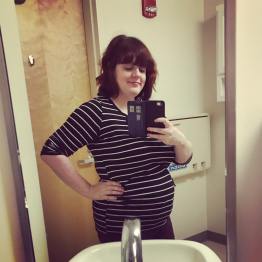